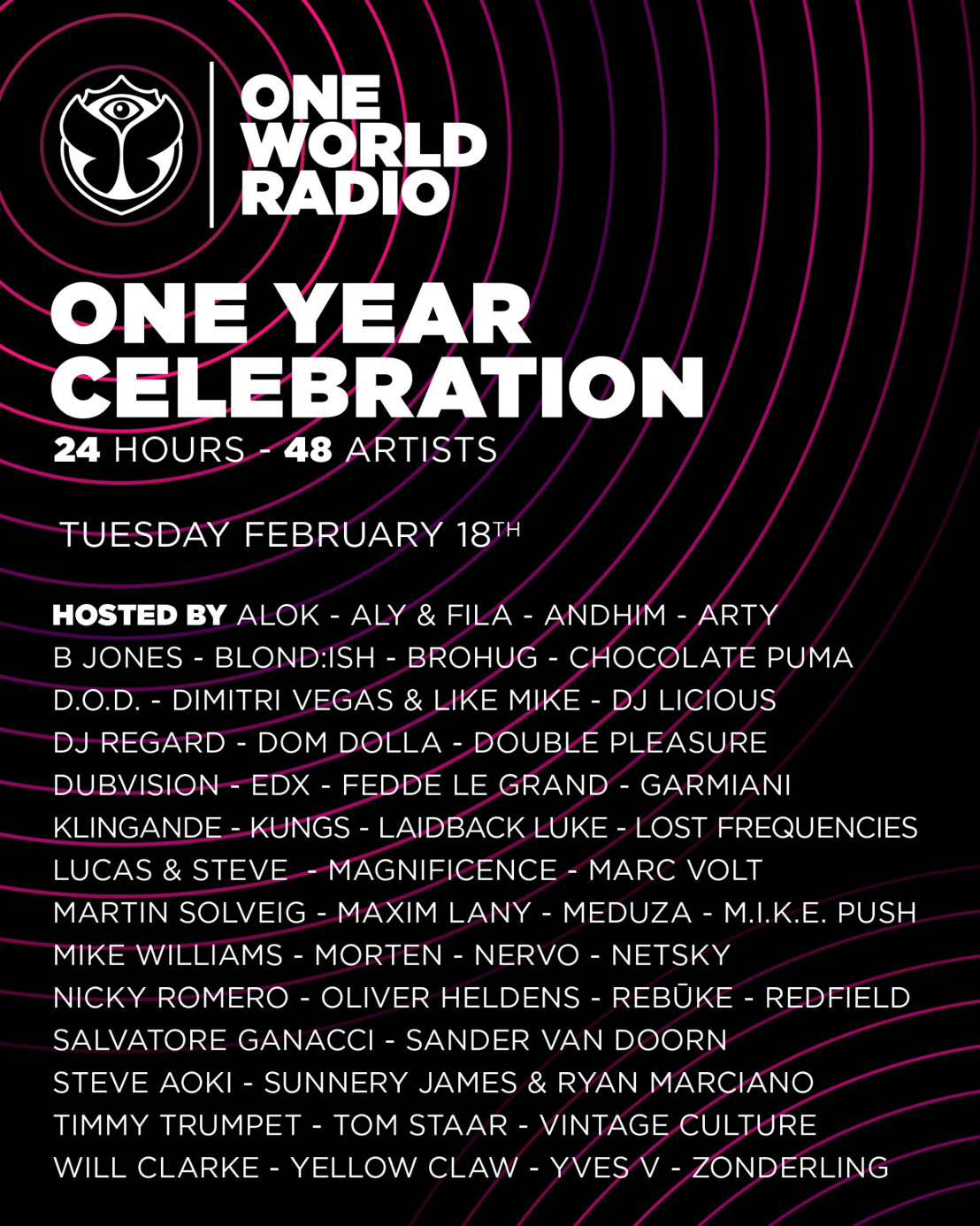 Monday, 17 February 2020 - One World Radio is turning one year old this Tuesday February 18th! Tomorrowland’s digital radio and content platform is celebrating its 1st anniversary in a way that has never been done before – inviting 48 world class artists and friends of Tomorrowland from all around the world to each take over the radio and co-host for half an hour, including Alok, Dimitri Vegas & Like Mike, Dom Dolla, Fedde Le Grand, Kungs, Laidback Luke, Lost Frequencies, Martin Solveig, Meduza, MORTEN, Nervo, Netsky, Nicky Romero, Oliver Heldens, Salvatore Ganacci, Steve Aoki, Sunnery James & Ryan Marciano, Timmy Trumpet, Yellow Claw, Yves V, and many more. Listeners who tune in to the One World Radio anniversary special will be treated to the best music out there, with more than 20 world exclusive unreleased tracks by different artists – turning One World Radio’s birthday into one of the biggest days of the year!

Dimitri Vegas & Like Mike: “One World Radio is an incredibly important and refreshing project. We are very happy that Tomorrowland has its own radio and content platform, because it allows fans around the world to connect with Tomorrowland on a daily basis.”

Armin van Buuren: “It is amazing to see that Tomorrowland is not just opting to create a traditional radio show. By mixing exclusive new live and on-demand content with some of Tomorrowland’s biggest moments over the years, One World Radio has a unique angle that sets it apart from the others.”

Looking back at one year stacked with highlights
​In February 2019, Tomorrowland celebrated its magical 15th anniversary with the launch of its very own digital radio and content platform: One World Radio, broadcasting live, 24/7 in the mix. Initially, it was meant as a special temporary 15-year anniversary project, but after it became a massive success with People of Tomorrow from all around the world expressing their love for the radio, Tomorrowland decided to turn One World Radio into a permanent station. One World Radio has had a massive first year full of highlights, stacked with unique content and programs and exclusive tracks, bringing the sound of Tomorrowland to millions of listeners across the globe:

Get ready for much more to come!

Vintage Culture - Deep Inside Of Me (Deadline Remix)

Double Pleasure, MC Shurakano - We Got This

B Jones - Time is Now

B Jones - Runnin Through the Night